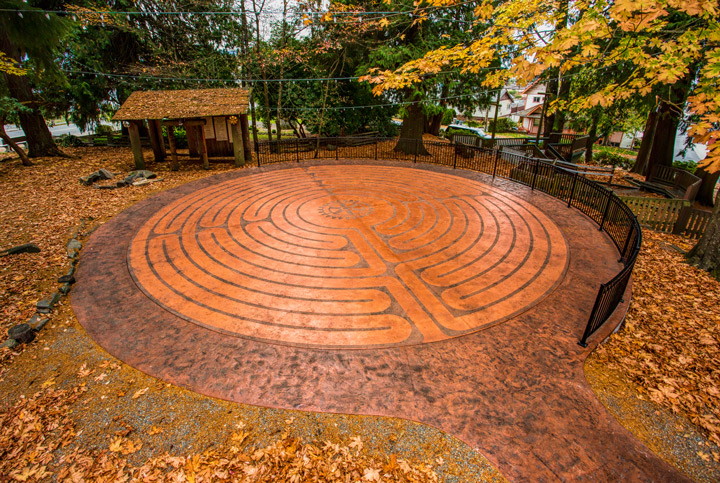 The Chemainus labyrinth was built in Waterwheel Park by members of the Chemainus Rotary Club in 2017. The majority of the funding was provided by the Chemainus Festival of Murals Society with support from Rotary, the Municipality of North Cowichan and Surespan Construction. Rotarians cleared and prepared the site for the concrete base to be poured and laid out the stencil for the sand blasting of the design. The labyrinth is a place for people of all ages to walk and relax in a beautiful setting surrounded by nature.

Take a walk on the calm side.

A project of the Chemainus Festival of Murals Society, with support from the Chemainus Rotary club and the Municipality of North Cowichan, with special thanks to Ken Stanton, Castle Cove Builders Ltd.  Created in 2017.

The Chemainus Labyrinth in Waterwheel Square, in the Breamore design, of the medieval style, is the latest addition to the approximately 75 labyrinths on Vancouver Island.

Labyrinths are ancient human symbols known to go back at least 4,000 years and probably much further. They appeared on most inhabited continents in prehistory, with examples known from North and South America, Africa, Asia, and across Europe from the Mediterranean to Scandinavia.

A labyrinth is not a maze; it is a walking meditation device with a single winding path from the edge to the centre. There are no tricks, choices, or dead ends in a labyrinth walk.